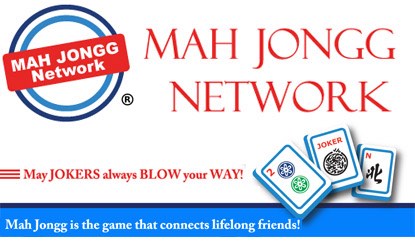 Object: The object of the game is to be the first player to complete a hand on the Mah Jongg Junior card. The winner of each game gets the points value of their hand that is listed on the card. Players collect points for each game they win. Games continue until the first player reaches 50 points and he/she is declared the winner of that set of games.

Setting Up:  One rack is placed in front of each player. It holds your tiles while you are playing. The four racks will form a square. The 152 tiles are placed face down in the middle of the square formed by the racks and shuffled. Each player takes 38 tiles from the center of the table and sets up a wall in front of their rack that is 19 rows across of 2 tiles high, all stacked face down. All 152 tiles should now be in walls and no tiles should be left in the center of the table.

Dealing: Each player rolls 2 dice. The player with the highest number rolled becomes East. East pushes their wall out to the center of the table and takes 4 tiles(2 stacks of 2 tiles). Then the player to the right takes 4 tiles. This continues counterclockwise until 2 tiles remain in the first wall. The player to the left of East pushes out their wall and adds the 2 remaining tiles to the end of it. Then picking 4 tiles each continues counterclockwise until all players have 12 tiles in front of them. East then takes the first and third top tile on the wall in the center of the table and going counterclockwise the rest of the players each take 1 tile from the end of the wall. At the start of each game, East will have 14 tiles and all other players will have 13 tiles. Dealing is now complete and all the players can put their tiles on their racks for sorting and analyzing which hands to play.

Play: The East player discards an unwanted tile face up in the center of the table. The player to East’s right can either take that tile or draw a new tile from the wall in the center of the table. Then that player discards an unwanted tile from their hand to the center of the table. Play continues counterclockwise with each player either picking up a discarded tile or drawing a new tile and then discarding an unwanted tile from their hand. When all tiles have been drawn from the first wall. Then the player to East’s left pushes out their wall and play continues until the second wall is done. The player across pushes their wall out and play continue until that wall is done. Then the player to the right pushes their final wall out and play continues until that wall is done. Mah Jongg can be declared by a player at any point in the game. If all tiles have been drawn and discarded without any player calling Mah Jongg then it is called a Wall game and all players get zero points. During play, it is important to keep track of the tiles on your rack. You should ALWAYS have 13 tiles. The 14th tile is the tile you need to call Mah Jongg.

A PAIR means 2 of a kind in like tiles.

A PUNG means 3 of a kind in like tiles.

A KONG means 4 of a kind in like tiles.

Dead Hands: A hand is considered dead when you have an incorrect number of tiles in your hand. It can also be called dead when you have the wrong number of tiles exposed on your rack. Any player can call your hand dead at any time during play. A dead hand stops picking and discarding immediately. The player of the dead keeps his hand concealed and sits out until the game is either won by another player or until the game is over. The player with the dead hand receives zero points at the end of the game.